Before we get on to this month’s event, a word about Sunday 29th April, which is our Open Night. If you’re interested in reading at Shore Poets, then throw your name in the hat for a 5-minute reading by emailing shorepoetsedinburgh @ gmail.com by the end of the day on Saturday 14th April. [Please don’t use any other email address or leave a comment on a social media platform.] We’ll draw names from that hat and also create a reserve list in case of dropouts.

But first we have the March event! We have three fantastic, varied poets. Please join us this Sunday for a great line up –

Sunday 25th March 2018
7pm (doors open 6.30pm)
Oh! Outhouse, 12a Broughton Street Lane, Edinburgh, EH1 3LY
Admission: £5 (concessions £3)
Please be there in plenty of time to get a seat. Unfortunately, fire regulations mean we have to turn people away if the room becomes overcrowded. 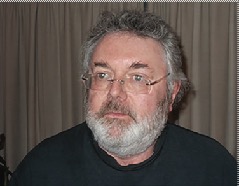 William Hershaw is a poet, playwright, folk musician and Scots Language activist. His Stars Are The Aizles – Selected Poems In Scots 1976-2016 was published in 2017 by The Neepheid Press. In the same year the Roncadora Press published Buirds featuring linocuts by Fiona Morton. He is the leader of The Bowhill Players, a musical and dramatic group who perform the works of Joe Corrie and other Fife based miner poets. In 2018 Grace Note Publications will publish The Sair Road, his Scots version of the Stations of the Cross. Other works by the author include: Tammy Norrie (novel); Postcairds Fae Woodwick Mill – Orkney Poems in Scots (poetry); The Tempest in Scots, Michael – A Ballad Play and Jennie Lee’s Homework Project (plays).

Hamish Whyte was born near Glasgow where he lived before moving to Edinburgh in 2004. He has published several collections of poetry and edited many anthologies of Scottish literature and runs the award-winning Mariscat Press. He has worked as a librarian, indexer, bibliographer and crime fiction reviewer and is an Honorary Research Fellow in the Department of Scottish Literature at the University of Glasgow. He plays percussion with the band The Whole Shebang. He has published three collections of poems with Shoestring Press, most recently Things We Never Knew (2017). A new pamphlet of poems is due from HappenStance Press, called Now the Robin.

Tessa Berring is interested in the shifting and often random relationships between the body, objects, language, and the creative process. She studied sculpture and drawing at Edinburgh College of Art, then turned her attention to words as they seemed a lighter/more flexible material to work with (and require far less studio space!). In her practice she regularly writes in tandem with visual artists, and enjoys how visual forms lend themselves to different styles of narrative. Recent work can be found in Adjacent Pineapple and Rialto Poetry. She also has a sequence of short poems ‘Paper, Dust, and Donkeys’ published by House of Three Press (Vol. 1), and a chapbook, Cut Glass and No Flowers by Dancing Girl Press. She is 1/12 of 12, a Scottish collective of women poets, who performed at StAnza poetry festival earlier this month.

The Normans (Norman: Normaunds; French: Normands; Latin: Normanni) were the people who, in the 10th and 11th centuries, gave their name to Normandy, a region in France. They were descended from Norse (“Norman” comes from “Norseman”) Vikings from Denmark, Iceland and Norway. This group isn’t them.

Based around the vocals of Norman Rodger (ex TV21), the Normans play an eclectic mix of songs, with an eclectic mix of musicians, sometimes several, sometimes just two or three. This gig sees a cut down version of the line-up, with just Norman on guitar and vocals, joined by Al Gray on bass guitar and Frank Glynn on fiddle, playing a short acoustic set.

It’ll be one in the eye for Harold!

We should have a wildcard spot this month. Please mention to the person selling tickets that you’d like to put your name in the hat (ideally we will ask you, but sometimes we forget to ask and then we feel sad once we remember our omission). Bring a poem to read in case you’re chosen! You’ll have three minutes (this includes any preamble or introduction – it’s a good idea to time yourself in advance to make sure you’re within the time limits).

1) we have a mailing list, and if you haven’t signed up yet, here’s your chance: just click right here and fill in the few bits of information. This is usually only for event notifications and things like ‘looking for slam/open night participants’. You can unsubscribe anytime you want to, although we would be sad if you did.

2) Our email address (take out spaces on either side of the @) is shorepoetsedinburgh @ gmail.com. Emails sent to any other email address go to the great rubbish bin in the virtual sky.