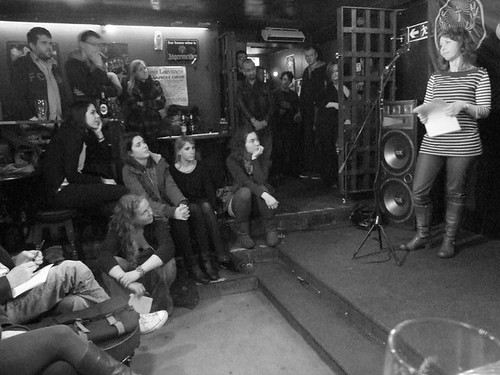 As promised in our last blog update, we’re mixing it up this month… doing something we’ve never attempted before!

Shore Poets NOVEMBER: Quiet Slam
in association with Be The First To Like This and Book Week Scotland

That’s right – we’re slamming! For the first time ever, we’re hosting our very own (quiet) poetry slam, especially for Book Week Scotland 2014. Ten poets will compete: six of them will be poets featured in Be The First To Like This, the brand new, very exciting poetry anthology from Vagabond Voices. The other four slam slots are open to anyone, and successful slammers’ names will be picked from a hat on the night! Prizes up for grabs include book tokens, poetry books and CDs, and our overall winner will progress to the Scottish Slam Championship finals!

What’s the format?
Each of our ten poets will perform twice. We’ll have a first round, in which each poet will read for a skinny two minutes, and be scored by our judges. After a break there’ll be a second round, and each poet will read again – this time for 2.5 minutes. This means each poet gets two chances to wow our judging panel! The top three highest scoring poets from rounds one and two will go into a final, where they’ll get chance to read for three whole minutes.
Interspersed among all this we’ll have our usual lovely music, this month from Various Moons. We’ll also have our raffle, so you’ll still get chance to win the infamous lemon cake!

What’s a quiet slam?
A quiet slam is a slam where loudness is not necessarily a virtue. Participants won’t be marked down for speaking softly, reading from paper, or being nervous (this seems obvious really, because we’re nice people and we don’t have hearts of stone). We also want to encourage slam virgins to take part – have you been intrigued by the whole slam thing but put off by the competitiveness and shouting? This is a good place to cut your slam teeth. Finally, judges will score participants on the quality of their poem and the quality of their performance alone. There will be no score for audience reaction – because it’s not fair for someone to walk off with the top prize just because they brought a lot of friends!

Prizes!
The highest scoring poet of the night will win a £30 book token and automatically go forward to compete in the Scottish Poetry Slam Championship finals.
The runner up will win a £20 book token and third prize is a £10 book token.
All performers will receive a small prize for taking part, too!

Can I take part…?
You can! There are four open spots up for grabs and performers will be selected via a random draw on the night. Just email publicity@shorepoets.org.uk to have your name put in the hat!

…even if I’m not in Be The First To Like This?
Yep! We’re promoting BTFTLT by offering six of our slam slots to poets who appear in that book. We’ll also be selling copies of the book on the night. This is because we feel the anthology is a really lovely recognition of Scotland’s many talented new and upcoming poets, and we want to help promote it. But the BTFTLT poets will also be drawn from a hat to find out who competes, and they’ll compete on the same footing as everyone else!

Judges
We’re happy to announce that our Head Judge will be our very own Jane McKie – you may remember her mad slam-judging skills from last Book Week Scotland, and the Dead Poets Slam at the Bongo Club! Helping Jane out with her very tricky task will be Dr Alan Gillis, Honorary Shore Poet and Lecturer in Creative Writing at the University of Edinburgh, and Jennifer Williams, Programme Manager at the Scottish Poetry Library.
The event will be hosted by Shore Poet and BTFTLT contributor Claire Askew.

Don’t worry – we’re not changing too much. Our venue is still the lovely Henderson’s at St John’s, and you’ll still be able to buy tickets for our famous raffle (books and other goodies added to the mix this month, as well as the lemon cake)! We hope you’ll come along and support us as we venture into new, uncharted territory!

Here are the most important details: