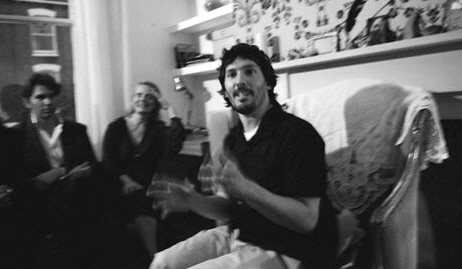 Happy May to you all of you poetry readers, writers and performers!

We were really pleased that so many of you came along to our April Open Night last month, and would like to take this opportunity to say thank you once again to everyone who performed. We hope you’ll all head out and visit us again this month, as we have a spectacular line up for May:

Our headline poet is Jacob Polley. Jacob is originally from Carlisle, but now lives in St Andrews, where he lectures in creative writing at the University. His three collections of poetry are The Brink (2003), Little Gods (2006) and The Havocs (2012), and in 2009 he also published a novel, The Talk of the Town – all published by Picador. Jacob’s poetry has been twice shortlisted for the TS Eliot Prize and the Forward Prize; it won an Eric Gregory Award in 2002 and the Geoffrey Faber Memorial Prize in 2012. All of his collections have been Poetry Book Society Recommendations.

Our Shore Poet this months is Hamish Whyte. For the past thirty years Hamish has run Mariscat Press, and he has edited several anthologies, including Mungo’s Tongues: Glasgow Poems 1630-1990, An Arran Anthology, and Kin: Scottish Poems about Family.
Hamish’s pamphlet Christmasses was published by Vennel Press in 1998. His long poem Window on the Garden was published as a book jointly by Essence Press and Botanics Press in 2006. Shoestring Press published A Bird in the Hand in 2008 and The Unswung Axe in 2012.

And our new poet for May is Pippa Goldschmidt. Pippa is best known for her novel The Falling Sky, published by Freight Books in 2012 and shortlisted for the 2012 Dundee Book Prize. However, she also writes poetry and short fiction, and has won various accolades for her writing in all genres – including a Scottish Book Trust New Writers Award in 2011/12.

We’ll also have live music from The Whole Shebang, and our famous-for-a-reason lemon cake raffle!

One thought on “Shore Poets MAY: Jacob Polley, Pippa Goldschmidt and Hamish Whyte”