Our next Shore Poets event will celebrate the last ever Mark Ogle Memorial Award (MOMA). Over twelve years, the award has commissioned work from some of the UK’s finest poets. Their poems have been gathered together in a pamphlet of all the stimulus and response poems. Watching Sunlight will be launched at the event, with copies available for a donation to a cancer charity.

Please join us on Saturday March 2nd, at the Cornerstone Centre, St John’s to hear the 2019 winner of the Mark Ogle Memorial Award: Jim McGonigal.

Jim will be joined on stage by previous winners: Anna Crowe, Vicki Feaver and Tom Pow. Angus Peter Campbell hopes to be with us, as does Meg Bateman, if the tide is right. Music will be provided by Shore Poets favourites, The Whole Shebang.

Mark was one of the earliest members of Shore Poets and one of the first to read at the group’s original venue, the Shore Gallery in Leith. His untimely death left his considerable poetic talent under-realised. His family decided to commission an annual award in which a poet, selected from the poets who had read at Shore Poets in the previous season, responded to one of Mark’s poems.

His poetry includes the prize-winning Passage/An Pasaíste (2004) and Cloud Pibroch (2010), both from Mariscat Press, and The Camphill Wren (2016) from Red Squirrel Press. His most recent work is Turning Over in a Strange Bed (Mariscat Press, 2017). His biography Beyond the Last Dragon: A Life of Edwin Morgan (2012) won a Saltire Award, and he co-edited The Midnight Letterbox (Carcanet Press, 2016), a selection of the poet’s correspondence 1950–2010. 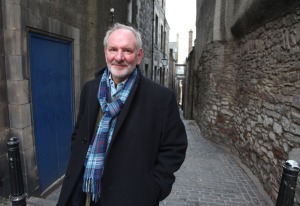 The Whole Shebang is an Edinburgh-based collective, formed in 2011, who play good-time music, from show tunes and standards through blues, country and western to contemporary pop.