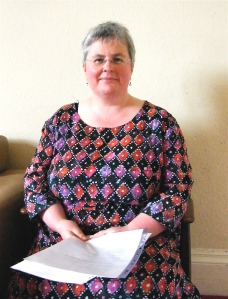 Angela McSeveney became a Shore Poet in 2003 and Treasurer not long after. Her first collection of poems, Coming Out With It, was published in 1992, after she received advice and encouragement from fellow writers Liz Lochhead and Ron Butlin. She has since published three pamphlets, the most recent of which, Still Bristling, was published by Mariscat Press in 2012. She lives in Edinburgh.

Infirmary Street Baths
They were built in 1895
when it was still believed that cholera
was caused by dirty paupers
not tainted drinking water.
Calling them Public Baths
got across at once
that they were meant for the municipal cleansing
of the working class.
When I swam there almost a century later
my immersions were only ever recreational.
(Back in my shared flat I had a bath,
toothbrush, soap, not to mention
the local launderette and the NHS.)
So I never had call to go upstairs
till an Open Day long after the Baths had closed
and the old Victorian building been revamped
into the Dovecot Tapestry Studios.
Leaning over the railings of the upper gallery
I looked down into the drained basin of the pool.
Three weavers sat at their looms
and plucked at the warp as if it were a harp
where I used to shuttle up and down
counting out the lengths
and the weaker swimmers darted back and forth
filling in the weft.