This month we’re delighted to welcome A C Clarke to Short Poets, along with Rex Sweeny and Joanne Bell. Please join us for our enlivening mix of poetry and music, which this month will be provided by Edinburgh-based trio Kleyne Klezmer.

A C Clarke lives in Glasgow. Her fifth collection, A Troubling Woman (Oversteps Books), came out in 2017. She was a winner in the Cinnamon Press 2017 pamphlet competition with War Baby (published 2018). Drochaid, a series of poems in Gaelic, Scots and English with Maggie Rabatski and Sheila Templeton was published by Tapsalteerie in December last year. Poems from her third collection, Fr Meslier’s Confession (Oversteps Books), have been set to music by poet and musician Catherine Eunson and will be performed in Glasgow in May of this year. She is currently working on a series of poems about Gala Éluard/Dalí and her circle. The first set of these is due to be published as a pamphlet by Tapsalteerie in 2021. 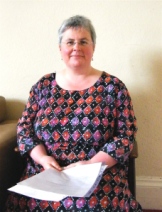 Angela McSeveney is Shore Poets’ treasurer. She lives in Edinburgh and works very part-time as a Care Assistant. Most recently she had two pamphlets published by Mariscat Press: Slaughtering Beetroot and Still Bristling.

Rex Sweeny arrived in Scotland in 1989 via Sussex and Oxford. He has been a civil servant, barman, theatrical script-reader, kitchen porter and resident secretary to a theology professor, among other attempts to deny his basic unemployability. More recently he tried to impose order on an estimated twenty thousand second-hand books in a cavernous charity shop in Musselburgh. His work has appeared in Poets’ Republic, The One O’Clock Gun, Torn Pages and the 2013 anthology New T@les from the Old Town. For the past five years, he has organised and hosted Leith Festival’s annual CultFusion poetry event.

Joanne Bell is writer, spoken word artist and teacher who has performed poetry at Bowery Poetry Club in New York, That’s What She Said at the Edinburgh Fringe and had her work filmed for the BBC. Her prose was selected for the Edinburgh International Book Festival’s emerging writer programme ‘Story Shop’ and has been included in literary magazines including Northwords Now, Salomé and Luminous, Defiant, an anthology by Listen Softly Press. She lives in Edinburgh with her dog Hope.

Kleyne Klezmer is an Edinburgh-based trio: Andrew Gardiner (clarinet), Jan Waterfield (accordion) and Simon Carlyle (tuba).  They have been playing together for several years, appearing as far south as Lancaster and as far north as it is possible to go on the Scottish mainland – Brough in Caithness.

Klezmer music has its oldest roots in the ancient modes of the synagogues. These motifs were expanded and blended with surrounding musical cultures by the Jews living in Eastern Europe; the result is an intriguing synthesis of eastern and western harmonies, traditions, instruments and moods. The music can be reflective or invigorating, happy or sad – often all at the same time.

After several decades of neglect, there has been a revival of interest, initially among the American diaspora and focused on its musical heritage.  We base our improvisatory approach to the music rather more on recordings and transcriptions from the pre-first World War Eastern European tradition.

We will have a wildcard spot this month. Please mention to the person selling tickets that you’d like to put your name in the hat (ideally we will ask you, but sometimes we forget to ask and then we feel sad once we remember our omission). Bring a poem to read in case you’re chosen! You’ll have three minutes (this includes any preamble or introduction – it’s a good idea to time yourself in advance to make sure you’re within the time limits).